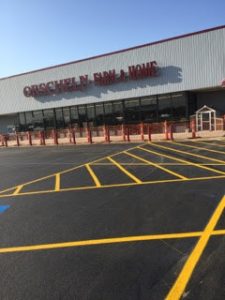 When a city has more than 480,000 residents and spans almost 320 square miles, good roads are essential. Adequate parking is also of extreme importance. When people in Kansas City, MO need new or replacement driveways for their homes or parking lots for their businesses, they frequently turn to the paving experts at All Pro Asphalt.

The first European known to visit the area around what is now Kansas City arrived around 1712. His name was Etienne de Veniard, Sieur de Bourgmont, and he was a former commander of Fort Detroit who was fleeing French authorities after deserting his post. In an effort to regain his standing, he wrote two books about the area that were published in 1713 and 1714. His ploy worked, and the French awarded him various high honors and named his commander of the Missouri.

In 1804, the Lewis and Clark Expedition camped in the area for three days. At the time, the population consisted primarily of several Native American tribes and a small number of French fur traders. The first permanent settlement on the site was a French trading post established in 1821 and called “the village of the Kansa.”

After Missouri was admitted to the Union in 1821, American farmers, trappers, traders and scouts began arriving in Jackson County. One of the earliest of these settlers was Moses Grinter, who arrived in 1831 and established a ferry service on the Kansas River. Two years later, the man nicknamed the “father of Kansas City,” John Calvin McCoy, established a trading post that he named “West Port.” Goods for the trading post arrived by boat at a landing near what is now Main Street.

In 1838, local investors purchased 271 acres from a farmer and named the area the Town of Kansas. The town was formally incorporated by Jackson County in 1850, which is traditionally considered the city’s founding date. At the time, there were approximately 1,500 people living in the town. Three years later, Missouri rechristened the town to the City of Kansas and formally incorporated it as such. The city had a population estimated at 2,500 and covered an area of less than a square mile.

Much of the city’s early growth was tied to the westward expansion. The major trails to the west passed through the area, and the city was the last place for travelers to purchase supplies before beginning their long, arduous journeys. However, rail travel began to become increasingly important following the Civil War. When the city was selected as the site for a railway bridge across the Missouri River in 1869, the population boomed. In 1889, the name was officially changed to Kansas City, and by 1890, the population had increased to almost 133,000 people.

All Pro Asphalt is a well-respected asphalt and sealcoating contractor servicing Kansas City, MO. and we off a variety of services, including asphalt paving, sealcoating, asphalt repair, parking lot striping, infrared asphalt repair, asphalt crack repair, concrete repair and concrete installation. We deliver outstanding results and use superior products, but our rates are highly competitive. You can request a free quote by calling our office at 816-249-6800 or submitting our handy online form.