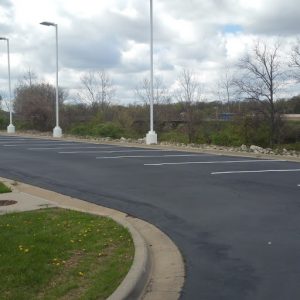 Liberty, the county seat of Clay County, is one of the many suburbs surrounding Kansas City. Although Liberty was technically established before Kansas City, the growth of the latter has played a significant part in Liberty’s growth. Many residents of Liberty commute to Kansas City to work, attend cultural events or further their education. However, this does not mean that Liberty is a bedroom community; it is a self-sufficient community with a proud heritage and a thriving economy. When the owners of residential or commercial properties in Liberty, MO, need asphalt sealcoating, asphalt paving, concrete installation, asphalt crack repairs, parking lot striping or other pavement-related services, they often call All Pro Asphalt.

American settlers began arriving in what would become Clay County shortly after the Louisiana Purchase. The settlement was named the county seat in 1822 and incorporated at Liberty in 1829.

The 1830s saw a dramatic rise in steamboat traffic on the Missouri River. The dock in Liberty typically received at least one steamboat each day that carried settlers and merchandise. Most of these steamers originated from points to the east.

The 1830s also saw the Missouri Mormon War. Joseph Smith, the leader of the Mormons, arrived in neighboring Jackson County in 1831 with a group of his followers. They believed that their righteousness would allow them to inherit the land that was already owned by earlier settlers. This created tensions between the Mormons and the earlier arrivals, and in 1833, the Mormons were forcibly driven from Jackson County. Many relocated to Clay County and later to Caldwell County, but lasting peace was not to be achieved. In 1838, Joseph Smith and several other Mormon leaders were arrested and jailed in Liberty over the winter. After their lawyer secured a new venue for the trial, Smith and the others escaped while being transported from Liberty.

Health care facilities, retailers, warehouses, manufacturers, restaurants, educational institutions, apartment complexes, office parks and shopping centers are just some of the types of enterprises that contribute to Liberty’s economy. We serve customers in these industries as well as homeowners, religious institutions, HOAs and entertainment venues. Commonly requested services include the ones listed below.

Asphalt Paving Liberty, MO: Constructing a new parking lot or street — or replacing the pavement on an existing one — is simplified when you have All Pro Asphalt handle the job. We also install asphalt overlays.
Asphalt Crack Filling Liberty, MO: Preventing water from seeping through cracks in your pavement can help ensure that your asphalt pavement does not fail prematurely. Open cracks make your pavement more susceptible to foundation erosion and the effects of the freeze/thaw cycle.
Asphalt Sealcoating Liberty, MO: If you have asphalt pavement, you need sealcoating. Sealants form a protective barrier between asphalt pavement and the elements, and they also improve the appearance of the pavement.
Asphalt Repairs and Infrared Asphalt Restoration Liberty, MO: At All Pro Asphalt, we offer traditional asphalt repairs as well as infrared asphalt restoration for repairing potholes, alligator cracking and other types of damage that need more than crack filling and sealcoating.
Parking Lot Striping Liberty, MO: If you want to make a good impression on your visitors, you want to make sure that your parking lot shows that you value their safety and care about the details. All Pro Asphalt can help you control the flow of traffic, ensure compliance with the ADA and make your parking lot safer and easier to navigate.
Concrete Liberty, MO: Whether you need to install curb ramps, repair a sidewalk or build an ADA-compliant access ramp, All Pro Asphalt can help. We have the experience and skill to deliver quality concrete work.
Parking Lot Paving
Parking Lot Repair
Driveway Paving
Pavement Maintenance

All Pro Asphalt is an asphalt and sealcoating contractor servicing Liberty, MO and provides all of the above services as well as the installation of speed bumps, parking lot signs, car stops and reflectors. We are committed to providing every customer with exceptional work at an affordable price. To request a free quote on your next project, you can either call 816-249-6800 or submit the online quote request.