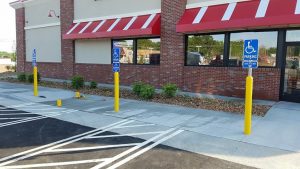 As a frontier town in the 1850s, Olathe lacked the elegant architecture that had become popular in New England. The few businesses and homes in the town were constructed from native stone and rough lumber, and streets were basically left to the preferences and imaginations of those who used them. Today, Olathe has well-defined streets and a thriving economic base to support the more than 135,000 residents of the town. Building, repairing and maintaining the streets and parking lots in Olathe, KS is an ongoing task, so All Pro Asphalt is frequently asked to assist. The services we provide in Olathe include asphalt crack repair, infrared asphalt restoration, asphalt paving, sealcoating, pothole repair, parking lot striping, concrete repair and concrete installation.

The Kansas Territory was created in 1854, and counties were organized the following year. In 1857, Dr. John Barton and a group of land speculators arrived in Johnson County. They selected a site for the town near the county’s geographic center, incorporating the town in 1857; a second incorporation was required the following year due to political influences. Allegedly, Barton was so impressed with the scenic beauty of the area that he felt that the town should be named Beautiful. Since the Shawnees had moved into the area in 1829, Barton asked what the word corresponding to beautiful was in their language. The interpreter replied, “Olathe.”

Olathe became the county seat in 1859, and by the following year, the population exceeded 340 people. Travelers following the Santa Fe Trail, the Oregon Trail and the California Trail provided most of the income for the town’s businesses and stores. By 1890, Olathe had almost 3,300 residents. However, by 1881, the nation had two transcontinental railroads, and by 1883, three more had been created by connecting independent stretches of track. The ease, speed and comparative safety of traveling by train reduced traffic on the trails that had generated a substantial part of Olathe’s income, and the town became an obscure, sleepy little town. By 1920, the population had fallen to 3,268.

After the Olathe Naval Air Station was commissioned in 1942, the town was jolted from the economic and social status quo that had lasted for 50 years. The population increased to almost 5,600 in 1950 and nearly 11,000 in 1960. Interstate 35 reached Olathe in 1961, fueling additional growth, and the city began increasing its size through annexation. By 1980, Olathe had more than 37,200 people, and by 1990, that number had increased to more than 63,400. Over the following two decades, Olathe’s population increased to 125,872 people.

Asphalt Paving Olathe, KS: Overlays can be an economical way to postpone a complete pavement replacement. However, if an overlay is not an option or there is no existing pavement, we can replace the existing pavement or provide new construction.
Asphalt Crack Repair Olathe, KS: Breaks in the pavement allow water to trickle down to the supporting base. If the base becomes destabilized due to water erosion, the result can be expensive repairs or the complete failure of the pavement.
Asphalt Sealcoating Olathe, KS: Tests have shown that when asphalt pavement receives professional sealcoating throughout its life, the pavement can often last twice as long as an unsealed pavement. Sealcoating provides protection against the causes of premature deterioration, and it also enhances the pavement’s appearance.
Parking Lot Striping Olathe, KS: Pavement markings and striping are critical for maintaining an orderly flow of traffic, enhancing pedestrian safety, reducing minor damages to vehicles, complying with ADA regulations and making your parking lot more attractive to visitors.
Asphalt Repair and Infrared Asphalt Restoration Olathe, KS: Alligatored asphalt, potholes, cracks too large to fill and other major damage can typically be handled by using one of two techniques. The traditional repair technique is sometimes described as the saw and patch method; the damaged area is cut out, new asphalt is applied in the void and the new asphalt is extended to cover a few inches of the pavement surrounding the repair. The second technique uses infrared technology to warm the damaged asphalt, new asphalt is mixed in and the result is a strongly bonded, durable repair that is often very difficult to see.
Concrete Olathe, KS: For some projects, concrete is an ideal pavement. Handicapped ramps, loading docks and sidewalks are often paved with concrete. However, over time, concrete may become uneven or cracked due to invasive tree roots, ground heave or soil instability. All Pro Asphalt installs and repairs concrete pavement.
Parking Lot Paving
Parking Lot Repair
Driveway Paving
Pavement Maintenance

All Pro Asphalt is an asphalt and sealcoating contactor servicing Olathe, KS. We offer all of the services listed above to homeowners, municipalities, retailers, health care facilities, HOAs, commercial property managers, restaurants, hotels, schools, churches and industrial facilities. Our prices are reasonable, our customer service is outstanding and our work is exceptional. To request a free quote, fill out our handy online form or give us a call at (816) 249-6800.