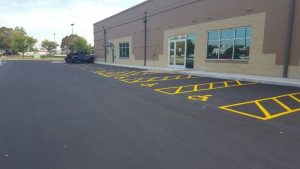 Between 1950 and 2010, the population of Shawnee, KS increased from 845 to more than 62,200. The influx of new residents attracted many new businesses, so building an infrastructure — including streets and parking areas — was probably challenging at times. Today, homeowners and commercial property managers know that they can count on All Pro Asphalt for various paving services, including concrete installation, asphalt paving, concrete and asphalt repairs, asphalt sealcoating, infrared asphalt restoration and parking lot striping.

The recorded history of the area surrounding Shawnee can be traced to 1803, the year that the United States bought the land from France as part of the Louisiana Purchase. By 1824, several trading posts had been constructed, and in 1827, Fort Leavenworth was built about 34 miles from present-day Shawnee.

In 1825, treaties were signed that gave 1.6 million acres of land in what are now Johnson, Douglas and Wyandotte counties to the Shawnees. Shawnees from Pennsylvania, Missouri, Ohio and Indiana began arriving in Johnson County around 1828. The tribal leaders chose Johnson County for their headquarters. Many of these new arrivals as well as members of other tribes relocated nearby perished during a smallpox epidemic in 1830.

In 1854, Kansas was organized as a territory, so a new treaty was offered to and accepted by the Shawnee. The treaty required the Shawnee to surrender the 1.6 million acres granted in the previous treaty in exchange for a payment of $829,000 and 200,000 acres that could be distributed to individual members of the tribe in 200-acre allotments. Tribal members could accept the allotments and remain in Kansas, or they could move once again and accept allotments of land in Oklahoma.

As soon as counties in the new territory were formed, settlers began flocking to Kansas. The territory’s first capital was the Methodist mission near what would become Shawnee. The community was incorporated as Shawneetown in August 1856. The following year, during a brief period when the community was known as Gum Springs, it became Johnson County’s first county seat. A town was laid out, and when a post office was established in 1858, the town’s name became Shawnee.

Like many towns in Johnson County, Shawnee suffered during the Civil War. The town was raided by guerrillas commanded by William C. Quantrill, resulting in two deaths and the burning of many businesses and homes in the town. Numerous residents chose to leave Shawnee to find safer, more peaceful lives elsewhere.

Despite the hardships of the Civil War, various natural disasters and the Great Depression, Shawnee persevered. By 1940, the population had reached almost 600. In the years following World War II, Shawnee and most towns in Johnson County began to experience growth that was fueled in part by the growth of Kansas City. By 1960, there were more than 9,000 residents in Shawnee, and the population more than doubled during the next 10 years. Today, the population is estimated at approximately 66,000 people.

Asphalt Paving Shawnee, KS: An overlay is a layer of new asphalt that is applied to an existing pavement that has incurred damage over a wide area. We offer overlays as well as new asphalt pavement and replacement pavements.
Crack Repairs Shawnee, KS: Asphalt pavement can fail if water penetrates to the foundation and weakens it. Timely repair of cracks can prevent many costly repairs or the premature failure of the pavement.
Asphalt Sealcoating Shawnee, KS: Sealants safeguard the integrity of your asphalt pavement and improve its appearance. Sealcoating, however, is not a one-time treatment. It should be applied at scheduled intervals to ensure that it offers maximum protection.
Parking Lot Striping Shawnee, KS: Economical parking lot striping and pavement markings help control traffic, making your lot safer for everyone. However, you should have your lot painted by someone who understands the complexities of the regulations contained in the Americans with Disabilities Act.
Asphalt Repair and Infrared Asphalt Restoration Shawnee, KS: Potholes, alligator cracking and other types of serious damage need prompt repair. Sometimes, this means removing the damaged pavement and replacing it. However, if the area is suitable for infrared restoration, the result will typically have a superior appearance and a longer life.
Concrete Shawnee, KS: There are times when the right paving material is concrete. Like all pavements, however, concrete will require occasional repairs. We install and repair concrete pavements.
Parking Lot Paving
Parking Lot Repair
Driveway Paving
Pavement Maintenance

All Pro Asphalt is an asphalt and sealcoating contractor servicing Shawnee, KS.  We install, repair and maintain asphalt and concrete, offer parking lot striping and can perform infrared asphalt repairs. The quality of our work is superior, but our rates are affordable. For a free estimate, complete the online form or call 816-249-6800.